We’ve been privileged to have been involved in many historic events.

One of the world’s largest musical events is the Eurovision Song Contest. We’ve had the pleasure and honour of delivering the contest’s pyrotechnics and special effects for several years. To date, the most memorable event for us was the 2007 contest in the Helsinki Hartwall Arena. It was the first and only time that this event has ever been held in Finland. Additionally, we were involved in the contests held in Belgrade in 2008, Moscow in 2009, Malmö in 2013, Stockholm in 2016, Ukraine in 2017 and Israel in 2019. In Athens, too, we were able to join with Lordi to make Finnish history in 2006. Co-operating with some of Finland’s finest musicians has been no less of a pleasure – we’ve worked with Nightwish since the early 2000s. In addition, we’re accustomed to many different settings on both smaller and larger tours. Of these, we could mention the Katri Helena & Jari Sillanpää Me Starat (”We Stars”) tour 10–15 yeas ago, the Idoleita ja tähtiä (”Idols and Stars”) tour, as well as the Yö’s Kuolematon (”Immortal”) tour. Currently major tours include Juha Tapio & Raskasta Joulua, Antti Tuisku’s Mun on pakko twerkkaa as well as Cheek’s Täältä sinne tour. In terms of our European projects, unforgettable gigs by Ghost and Nightwish left the most lasting impressions on our minds.

We’ve also been involved in producing the opening and closing shows of several sports events. The most memorable have been the wild pyrotechnic explosion from the roof of the Olympic Stadium for the Helsinki World Athletics Championships, as well as the UEFA European Women’s football tournament in the summer of 2009, for which we covered all the stands with soap bubbles. And as of 2007, the ice hockey games of Finland’s Jokerit team have opened with dazzling gas flame displays!

We’ve also produced effects for Finnish TV programmes, including Idols, The Voice Finland, Huuma (”Ecstasy”), Talent Suomi (”Talent Finland”), and, for several years now, the Eurovision national qualification rounds as well as Kuorosota (”Choir Wars”). Another fantastic experience was to be part of the NRJ Radio Music Awards from 2005 to 2007.

We can only add that the events mentioned above, as well as all the other displays we’ve carried out, have also been Fantastic Moments for Pyroman! 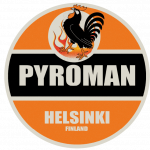